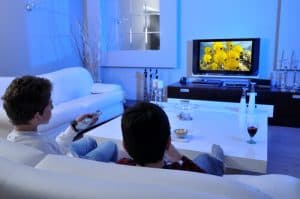 Freeview Play has become more and more popular recently (even though it has been released since 2015.)  Although this down to a number of potential reasons, perhaps the most prominent reason as to why Freeview Play has become very popular is because it is now a common feature on new Smart TVs. Although this has been developed over time, Freeview Play is now available on 19/20 television manufacturers’ televisions (as manufacturers are given their own skin to change as long as it retains prominent Freeview branding.) Combining online content and classic television, Freeview Play is another exciting alternative to subscription-based television. At The Aerial Man, we offer Freeview Play boxes to our customers as well as offer additional Freeview services with our official trade partners Humax. In this article, we will investigate Freeview Play as well as discuss the features that are available with the Freeview Play service. For more information on Freeview Play or if you wish to install a Freeview Play box then enquire with The Aerial Man today or telephone our team directly now on: 01179 679 028